The old boundary around Druid Lake. (Now they’re doing construction and I think this rusty fence will be removed but I kind of like its shabby chic character.)

I am often struck by the utter diversity of the English language and how one word can mean such different things. I am sure other languages have similar homophone and homograph patterns but being that I am American, I can speak only English, and I can only speak for English homophones and homographs. The best explanation of homophones is by R&B singer, Brian McKnight and Cleo the Lion. It’s only a minute—just invest the time.

When I pause and consider words that have such different meanings, I’m amazed by homographs like ring, form, bat, I can (can!) keep going but I’ll spare (spare!) you. Then there’s the homophones that vary widely in meaning such as ale and ail or air and heir. I’ll metaphorically slap myself across the face here because this piece isn’t actually about homophones or homographs, it’s about a word that I have been hearing and thinking about a lot recently. In different contexts it can be completely lauded and coddled, yet in others it’s vilified and spat upon. I think that navigating this homo-graphic/-phonic concept will always be one of the great (meaning large) struggles of my life.

Take a deep breath–I’m not actually going to get political. As elected officials argue about “the wall,” point values of immigrants, and their own egos, the boundaries of countries are dominating the news cycle. What’s amazing to me is that these somewhat arbitrary boundaries, or borders, weren’t even decided until about 150 years ago and in one case, we gave up a piece of land less than 50 years ago. The Gadsden Purchase got us the southern part of New Mexico and Arizona in 1853. We got this land literally on sale for $10 million. Then, in 1970 we gave Mexico the Horcón Tract, a piece of land that we had forgotten was technically ours. At the time, its residents paid Mexican taxes, attended Mexican schools, and one journalist called them the Forgotten Americans. An American company had already forcefully dried up the Rio Grande in the Horcón Tract so we said “Oh well, you can have it.” And that boundary was solidified. But still, doesn’t it look random? Just sayin’.

In 1983 Madonna released “Borderline,” which, word-wise, has almost nothing to do with boundaries although she repeats a close synonym throughout the song: borderline. Is this actually lyrical genius by lyricist Reggie Lucas? Or did those syllables just fit?

Either way the music video brings it back to the borderline. In the short drama, seemingly Madonna is in love with a Mexican (gasp!) but occasionally makes out with her photographer who drives the ugliest sports car I’ve ever seen. She is actually hanging out near what seems to be the borderline when she plays billiards with her Latina lover. It’s a classic battle between the guy with the ugly, yet expensive car and the poor, billiard hall foreigner. Watch to find out who wins. I’d recommend putting the volume on mute though. “Borderline” is surprisingly offensive to the ears.

The word boundaries has such extreme meanings. It can be so positive and then so negative. When people talk about boundaries in a positive way, it’s often about setting limits on what is appropriate. Positive boundaries that everyone is supposed to set are personal, emotional, mental, and maybe more. Boundaries are cast out as negative in the cases of Doctors Without Borders, Love Without Boundaries, and the one that I see the results of daily, redlining.

As an educator, one has to teach boundaries to children. It’s a tough concept to get, even for adults. When I worked at Panera in high school, I learned about a certain boundary in an icky way. One day a man that came in and talked to me often called me to the side of the bakery and asked if I wanted to go to dinner with him some time. He was maybe in his 40s. I was maybe 16. I was always friendly because I was a good employee and I loved that job I did not realize that some people take friendliness as an invitation. That was a shivering introduction to boundaries.

When I was 20, I moved into Mt. Vernon into an apartment called Four Reasons with my friend Lauren. The day I brought in my new mattress with my dad, I greeted a new neighbor. I said that my name. He said his. I probably called him “Neighbor” instead, like a dufus. A few days later I received two letters from him, sitting on top of the mailboxes in our building. We call these “The Sugar Bear Letters.” They’re a combination of really, unfortunately funny and extremely gut-wrenchingly sad, and an example of a real need for boundaries. But, in these two incidents I learned that others sometimes cross your boundaries without you even knowing you needed to set them.

Boundaries have been in my head lately because I need to establish some. Just ask anyone who loves me. As I am setting up what my dad called “the gig lifestyle” I have to figure out where my boundaries are. Teaching is an amoeba. If you let it, teaching will literally infiltrate every part of your day even, and maybe especially, your dreams. It’s boundary-less, if you let it be. And that’s what I did. I’ve carved out my new job to be 32 hours per week + hopefully tutoring + maybe teaching yoga. Not knowing how this whole piece-meal thing will work, or even if it will, I have to set boundaries. I’m in this new position because I worked myself into crippling anxiety and I needed to get out. But it’s up to me to prevent that from happening all over again.

After Four Reasons, I moved in with my friend Pilar who gave me something I’ve kept for seven years: my Certificate of No. I don’t often think of it nor use it. But, I keep it as a reminder. I think I will give it a prominent spot on the fridge where it was when I lived with Pilar. Thanks, P. 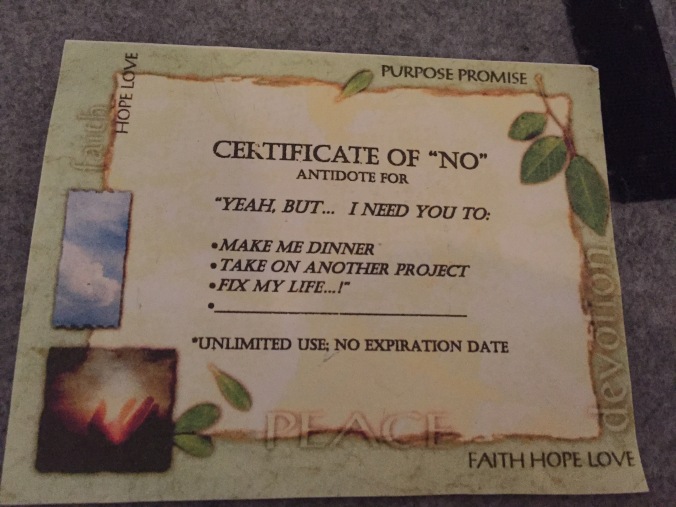 At the end of each day, I know I will be better at everything I do if I have time to myself. The older I get, I am realizing I might be one of those introverts disguised as an extrovert. I love people and my people are the best people. But, I recharge alone. Well, alone with The Bachelorette on in the background or a “This American Life” filling my kitchen. I clean the kitchen and bathrooms. I wax my armpits. I look at our garden. I sweep the floors. I practice yoga or go for a run. I bake a dessert. I fall asleep reading. I make a Goodwill pile. I take a bath. I can’t explain why these activities recharge me but I literally just described my perfect day.

In my “new life,” I may try to set my boundaries around my alone time and allow the rest to fill in organically. That sounds less stressful to me than a structure like “I will spend one hour doing this, two hours doing that, 34 minutes cooking dinner” and so on.  Something I am finding difficult about this is that I love everything and “get out of your comfort zone” is a mantra for me. I want to do everything. The second I hear about some new opportunity, idea, event, type of yoga, race, book club, gathering, social justice cause, I just want to join. My inner Amanda might be on crack. But the outside Amanda needs a lot of naps.

Boundaries can be controversial, nebulous, worn-down, necessary, too strict, welcomed, or maligned. What a word! And we all have to find out what it means for us and then make that perfectly clear to the people around us.

I don’t really have a reason for including this picture other than it’s awesome. Lake Roland circa 1992.

PS: Happy Birthday to my baby cousins Ben and Zack who are 19 today but still 18 months old in my heart.

One thought on “What’s in a Boundary?”