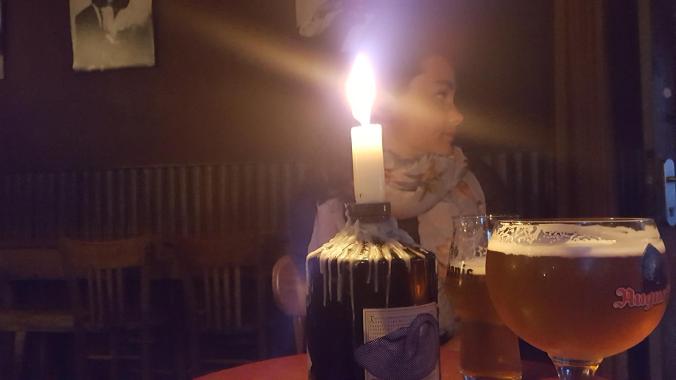 I have no justification for this photo being the cover for this post. But I like this picture and I wanted to include some image.

On Wednesday I was in a Lyft on the way to the Orioles game and of course I struck up an invasive conversation in which I turned into an inquisitor the strength of which the world has never seen–well, since the last time I took a Lyft. My driver (to whom I actually gave the address for this blog–What up, Kevin?!) was forced to reveal deeply personal details about his life because of my persistent inquiry. But he was a good sport. He said that he was in the military so I asked what he thought about the military. He told me that he has extremely mixed feelings but that it helped him out when he needed it. When he was a senior in high school he was shopping around for D1 track and field programs for college. He said he had used up all of his visits (I didn’t know what this meant but I am guessing there’s a certain amount for recruited athletes…?) but the night before the decision deadline a D1 school in Alabama reached out and offered him a full scholarship. He and his family deliberated all night and in the morning, decided to take the offer. He shipped off to school that fall and began training with the team. Then,  during that very first season on a trail run during practice he fell off of the trail and down a hill, fracturing his back. Yes, that’s apparently a thing. He left school, stopped running, went back home to Texas and when he found himself doing nothing and hating it,  he joined the Navy. So instead of running competitively for four years or maybe more, he ended up with the Navy, working in suburban Maryland, and mildly disliking Baltimore while driving Lyft all around it. (If you know me at all, this is why I gave him my blog address.) And that’s when I started thinking about The Butterfly Effect.

Now, I wasn’t really thinking about the 2004 Ashton Kutcher movie but I wasn’t not thinking about it. Because, quick diversion, when I was dating my late high school/early college boyfriend who ended up addicted to drugs and then dying at 27, the first time I caught him in a lie–and he was pathological–I had rented The Butterfly Effect and he said he’d take it back on time. But, he didn’t. And when I saw that movie still sitting on top of his DVD player a few days later, I should’ve known. But that was not my own Butterfly Effect. I did have an important one, just a few years later with a different guy.

The Butterfly Effect as a scientific concept came about from the brain of an MIT meteorology professor named Edward Lorenz. The more scientific version is the “sensitive dependence on initial conditions.” Lorenz’s discovery was that some tiny factor could lead to so many other consequences that the flap of a butterfly’s wings in one hemisphere could cause a tornado in the other. According to this article, “Like the results of a wing’s flutter, the influence of Lorenz’s work was nearly imperceptible at first but would resonate widely. In 1963, Lorenz condensed his findings into a paper, “Deterministic Nonperiodic Flow,” which was cited exactly three times by researchers outside meteorology in the next decade. Yet his insight turned into the founding principle of chaos theory, which expanded rapidly during the 1970s and 1980s into fields as diverse as meteorology, geology, and biology. ‘It became a wonderful instance of a seemingly esoteric piece of mathematics that had experimentally verifiable applications in the real world,’ says Daniel Rothman, a professor of geophysics at MIT.”

So here are some verifiable applications in the real world, albeit I am certainly stretching the term “Butterly Effect.” Who knows? This could be the first time this article is cited in a Baltimorean’s blog.

So, my Lyft driver Kevin’s B.E. was his fall from the cliff. Mine came when an idiot threw a beer can at no one at Preakness 2008. That can struck Charles Arthur Eby IV in the head. The strike led Chas to the medical tent where he was told to leave immediately to get stitches. He stayed anyway but slowed down on his typical Preakness-Day-level-drinking. He then approached me, more sober than before and more able to speak with a human female, and here we are 10 Preaknesses later. A butterfly flapped its wings.

Cindy Eby, my mother in law, is like a Butterfly Effect creator. Several years ago she cut out this article from the Baltimore Sun and gave it to me. It describes a school-in-planning. It would be an all girls charter in Baltimore City with project-based learning, a focus on active citizenship. I loved everything I read. So I stalked the process. I believe I was their first applicant. Wimbamboom. Here we are today! Because a butterfly flapped its wings.

About five years before that, Cindy cut out a tiny job posting from the paper and gave it to Chas when he left for a month of finding himself in Costa Rica, jobless but optimistic. He returned, applied using that tiny one inch by one inch posting, and then Chas spent half a decade working that job for the state of Maryland’s Office of Preparedness and Response. After a butterfly flapped its wings.

Then there was the time we did a walk-through in a completely incomplete house. You couldn’t even see the floors there was so much junk everywhere. The flipper was passionate and hyper and he was a man named Loren. We walked out of the weirdest home viewing we’d ever been to–having not seen any other houses that weren’t actually complete–and Cindy said, “I have a feeling about this one.” Here we are in rounding out our fifth year at 807. I really cannot imagine living anywhere else. And a butterfly had flapped its wings.

When Chas spoke at the Stoop Stories back in December, I invited every single person we know, dead or alive. Shar came! (She’s alive.) Which was exciting for several reasons. She told me on the sly that she had a story that would fit the theme of the night: Unconventional Holidays. I took a stance of noncommittal concealed pressure for her to share her story at the free speaking time during the intermission. Eventually, Shar fell for my mind tricks (when I grabbed her hand and shoved it in the air) and she decided to share. From there, my boss Laurel heard Shar speak, asked if I thought she might want to work at Lillie May to which I responded, “I doubt it.” I asked Shar anyway to honor Laurel’s completely ridiculous idea. Here we are many months later and who works with me? Shar. A butterfly was flapping somewhere.

These types of things happen to me so often that I barely have the time to attach them to the Butterfly Effect but that’s what they are in my mind. I’ll check my email with 10 minutes left before a deadline. I ended up in a yoga class where I meet the person who eventually talked me into yoga teacher training…twice. I had lunch with Aunt Robin to discuss working at nonprofits in Baltimore and she said, “You know, I don’t think you’re finished with the mission of your school” and here I am at Lillie May for Year 3, seriously happier than I’ve ever been professionally. Flappity flap flap flap.

I feel two completely polarized ways about this. First, I feel grateful and continue to come back to the concept that everything happens for a reason. Second, I feel scared that I was so close to missing out. It makes me feel tiny and insignificant and out of control. Yet at the same time, I feel powerful and aware and all-knowing.

I think the Butterfly Effect is great motivation for being a teacher who sweats the small stuff and celebrates tiny victories or one who takes kids out to a museum and schedules meaningful trips. It’s a driving force behind complimenting others and holding the door and letting someone into your lane and saying hello to the person you haven’t seen in a long time. Because you just never know whether that tiny action will make all the difference.

I would guess we all fall somewhere in the middle, but certainly in the crosshairs of the Butterfly Effect.

5 thoughts on “The Butterfly Effect”