“We don’t have a word for the opposite of loneliness, but if we did, I could say that’s what I want in life.”
― Marina Keegan, The Opposite of Loneliness: Essays and Stories

Marina Keegan was a 22 year old recent Yale graduate (three days, recent) with a future of creative writing ahead of her when her boyfriend fell asleep at the wheel in a crash that instantly killed her. Now that the sad stuff is out of the way, her book, which is a collection of essays and stories, is beautiful. The essay for which the book is titled, “The Opposite of Loneliness,” is a description of Keegan’s life at Yale and her friends and the family she loves and how she feels whatever you call the opposite of loneliness. I read this book years ago but that concept has stuck with me and my own version just occurred to me the other day. Why don’t we have a word for the opposite of a victim? What do we call it when someone walks away from us better?

I’ve been reading my book club book late at night: I’ll Be Gone in the Dark: One Woman’s Obsessive Search for the Golden State Killer. Even if you aren’t familiar with the book, you can tell by the title, it’s perfect for late night reading for a person with above average anxiety. The book chronicles the victims of the Golden State Killer, also known as the East Area Rapist, who terrorized California in the 1970s and 80s. It’s victim after victim and when I think about his ripple effect, I’m horrified. When one person is a victim of a crime, be it rape, murder, armed robbery, whatever, that person is not the only victim. A partner, friends, family, offspring, they’re all affected by that act. So while the Golden State Killer has stats on paper of how many lives he ruined, really, he ruined hundreds more. When an adult is murdered, let’s say a 35 year old female, imagine the life-long weight that places on a family. The financial burdens, the parentless children, a widower, her parents burying their child, her employer, her friends’ heartbreak, the stray cat she fed, the dog that expects her to come home, the kids she carpooled, the coffeeshop dude she greeted on Fridays, and ripples and ripples and ripples. Victims straight up abound.

So that’s the large scale. But I also imagine the victims we can create so easily, maybe without even realizing it, on a small scale. This is pretty easy to do when you spend your days in a middle school. Maybe I’m too snarky when I ask someone to take off her massive hoop earrings. Maybe I edit an essay and my comment comes off just a little too harshly. Or a girl looks sad and downtrodden and I make the mistake of not asking what’s wrong. She might read my small action, internalize it, and then snap at another teacher or slam her mom’s car door, or pick a fight with a sibling and so on and so on. Again, victims abound.

On Saturday night when I left the hospital after visiting Emma (my beautiful, wonderful, adorable, brand new niece), there were three women in the patio in front of Hopkins just sobbing. They were shaking and crying and swinging and doing things you do when someone young dies. In the 8 seconds I saw their pain, I could feel it. Was it a shooting victim? A son, brother, and friend? In Baltimore City that’s often a safe leap to make. So then where do they go from here? If it was gun violence, did that shooter picture these young women openly mourning that night on Orleans Street? Did he visualize the pain of a community? Did he imagine how hard it is to concentrate in school or at work when you’re so sad? Did he picture a funeral for a teenager? Or how the victim will stay framed in photos stuck at 18 for eternity? Did he foresee the ripples created by his act?

So it’s easy to make a victim on a spectrum of scales. And it’s easy for that victim to then spread that hurt inadvertently or advertently (should be a word). So, shouldn’t our goal be to make the opposite of victims? 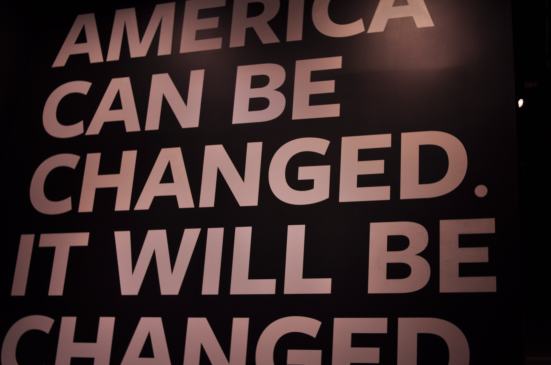 Photo from The National Museum of African American History and Culture.

When you look up the opposite of a victim, basically you just get synonyms of “perpetrator.” But that’s not at all what I’m aiming for here. I’m aiming for a word for a person who feels lifted and lighter and happier and more at peace from the action of another. And there is no word for that, as far as I know. But if anything should be a world-wide goal that anyone can get behind, it has to be that. Right? I imagine it like pixie dust. You hold the door for someone who’s at that far enough distance where you’re thinking, “Do I hold it? Or do I let it go?” You give a sincere and unexpected compliment. You leave a kind note. You carry up your neighbor’s recycling bin. You share your garden tomatoes. Or send a postcard, walk a new mother’s dogs, put away all of the laundry, tell someone she matters, share a novel that makes you think of a friend, buy a coffee or a ticket, nominate a colleague for an award, tap a shoulder and say “How are you?” with eye contact and love. Maybe you offer an essential oil or tell an old lady she looks nice or come to my yoga class (hint). Every act, even the tiniest ones, can create the same amount of ripples as victim-making. But for good. Sprinkle it here and there, and it grows. 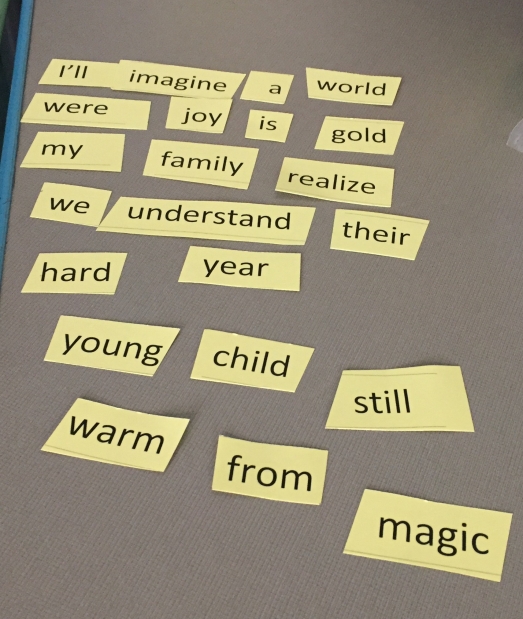 The work of a few of last year’s 5th/6th Writing Class.

So why don’t we have a word for this person who has been positively affected by the actions of another? Beneficiary? Too financial. Recipient? Too transactional. Victim comes from a Latin word for “denoting a creature killed as a religious sacrifice.” Vic means to conquer. So Latin for lift up is “leva” and help is “aux.” The best I got is “auxlevatim.” And to my loyal reader, yogi, and friend, Tim, I’m sorry you got wrapped into all of this. English for the Latin “tim” is “Tim” so I don’t understand. Today, make some auxlevatims. Let your pixie dust spread all over the worlds of those you lift and help.

We don’t have a word for the opposite of victims (except for auxlevatims), but if we did, I could say that’s what we should all hope to create in life.

In the red is he who most makes me an auxlevatim.

2 thoughts on “The Opposite of Victims”