In Summer 2013, Chas and I traveled to Colombia. I wish I had been more informed at the time but I hadn’t yet seen The Tale of Two Escobars. Just 10 years prior, apparently, Colombia had not been a safe place to travel. When we told people back then we were going there, we did meet with some versions of, “Are you sure that’s safe?” And my answer is yes, yes it was.

Chas and I were able to start in Cartagena, travel to Santa Marta, trek the Lost City Trek, and then spend a weekend in Medellin. While I highly recommend all of the places we visited in Colombia, this piece is about the Lost City Trek or La Ciudad Perdida. In some forms, it’s described as a Colombian Machu Picchu that’s luckily missing the “Disneyland” aspect of Machu Picchu. And it’s legit. It’s a total five day hike to a city that’s only been discovered in the past 50 years.

When I initially wrote this piece, version 1 was obliterated by my writing workshop. Ever been in one of those? I cried the entire way home from Johns Hopkins DC campus. But because I did an exhaustive amount of research for the first version to explain La Ciudad Perdida and its layers of history, here it is.

On night two, I’ve fumbled my way out of my mosquito net. Rain pelted the tin roof structure where we would eat, sleep, and remain for the duration of the storm. I had heard a rumor of coffee in the “kitchen.” And after our day of hiking, I hobbled to a warm cup of comfort—careful not to let the rainforest’s rain find my already damp clothes. During the five-day trek to La Ciudad Perdida (The Lost City) in the Sierra Nevada de Santa Marta in Northern Colombia, clothes never really dry.

My hiking group—two Belgian girls, a guy from French Canada, a South American couple, and my boyfriend and I—had instantly bonded. Our “Magic Tours” tour guide, Miguel, had a great sense of humor and bag full of Colombian candy. We sat together that night discussing tomorrow’s hike into the Sierra. A dozen hiking groups surrounding us were doing the same.

After a few rounds of coffee and conversation a man appeared at the table behind our group. Surrounded by a small crowd, he spoke. All eyes locked on his face as he described his culture, a mystery to gringos. Miguel approached our table, pointed to the man, and told us in mumbled Spanish, “You’re next.”

We had seen many indigenous people over the past two days, passing them on the trail. We were told that most indigenous hated tourists and didn’t want us in the Sierra Nevada. Many gave us rigid glares, some returned smiles, and others stared at the ground. We met a small family at their hut that morning: a young mother and five cherubic, dust-covered children, one for each year she’d been married. A small girl followed us to a waterfall where we swam. She crouched on a rock hugging her knees, watching and smiling.

Minutes later the man sat down in our circle. His name was Fermin. A member of the Kogi tribe, he was chosen to learn Spanish by the Mamo, the tribe shaman. Most Kogis speak only the Kogi language. With only English, I was at the mercy of my new friends to hear his words second-hand.

Fermin wore his white tunic under a cascade of black silky hair. (The only indigenous people we had seen not wearing white tunics were children in extra large Led Zeppelin T-shirts.) His elbows rested evenly on the tabletop and his thick, calloused hands moved as he spoke. The strap of a saddlebag crossed his heart, its sacred contents rested next to his hip. His jaw was never idle. He chewed a cocoa leaf and lime combination like all Kogi men over eighteen. Following each sentence he took a breath and looked down, his lips meeting in a line over decaying teeth.

Candles propped in emptied tuna cans lighted the exhibit. Fermin said he would be telling us first about his culture. His tribe—one of four that descends from the original Tayrona people—rely on and protect the earth. The earth is the Kogis’ mother and they honor her with everything they do.

He explained the sacred poporo in his bag—a gourd filled with lime and cocoa leaves. Males, beginning at age eighteen, use it to bring them closer to “The Mother.” A foot-long stick through a hole in the middle of the gourd delivers the lime to the inside of Fermin’s cheek, so the reaction can take place. Sacred Cocaine.

I sat mesmerized by a man who had so little in common with me. “A walk that takes you thirty minutes, would take me five,” he joked. Surprised, we were happy to self-deprecate, laughing, loudly, with him.

He gathered his lips and switched to a somber face. Looking at each of us with black eyes, he told of the destruction and contamination caused by tourists and people from outside of the Sierra Nevada. The Spaniards had conquered his people in the sixteenth-century. His people have not forgotten.

Fermin worries about the Sierra and about the Earth. If “little brothers,” people not from Sierra Nevada, continue on our path of environmental destruction, the Mother will be in danger. A fellow-hiker named Paula translated tens of generations of wisdom. Fermin sounded as if he represented the Green Party.

“You should not go to Ciudad Perdida,” said Fermin.

We all stopped breathing. The point of our trek was to go to Ciudad Perdida, to see its ascending staircases, to behold the green-coated structures, to smell the air near the clouds. Not go?

Fermin looked at each of us and continued, “But when you do,” he said as we exhaled, “keep positive thoughts in your minds.”

He said the “Lost City” was never lost because his people knew it was there. Once a year, the Mamos go there to spiritually cleanse it. “From the dirty tourists,” I thought.

He wrapped up his talk, and I wished I could ask him a question. Instead, I said no fewer than four times, “Muchas gracias.” I wanted to apologize for the Spaniards, English-only Americans and all tourists, and tell him how this urban girl would go home and remember everything he said.

I appreciate nature and like camping, but I’ve lived my whole life between two Baltimore City neighborhoods. His life and my life could only intersect in this exact circumstance for these few moments. I wished he could know its significance for me.

Paula later told me that, in Spanish, Miguel contrasted us with the Kogis and other tribes by calling them “indigenous” and calling us “civilized.” She had purposely translated it differently for us, disagreeing with his word choice. They were indigenous. We were non-indigenous.

In Fermin’s presence, I felt uncivilized. Back in the States, the animated kids’ movie about talking beasts, “Monsters University,” dominated the box office. A New York mother of two had been released on $500,000 in bail after being arrested for warehousing millions of dollars of illegal drugs.

And now I was in the rainforest, feeling like a monster, speaking to an indigenous man who was openly, legally, and peaceably using coke.

The next day we woke, crawled out of our mosquito nets, put on our wet clothes, and kept walking toward Ciudad Perdida—armed with Fermin’s message, offering the positive thoughts he had requested. In his own words.

Our accommodations along the trek. Three nights were hammocks and one night was a creepy bed, much preferred the hammocks.

At the base of the city.

Mother of four and her youngest. 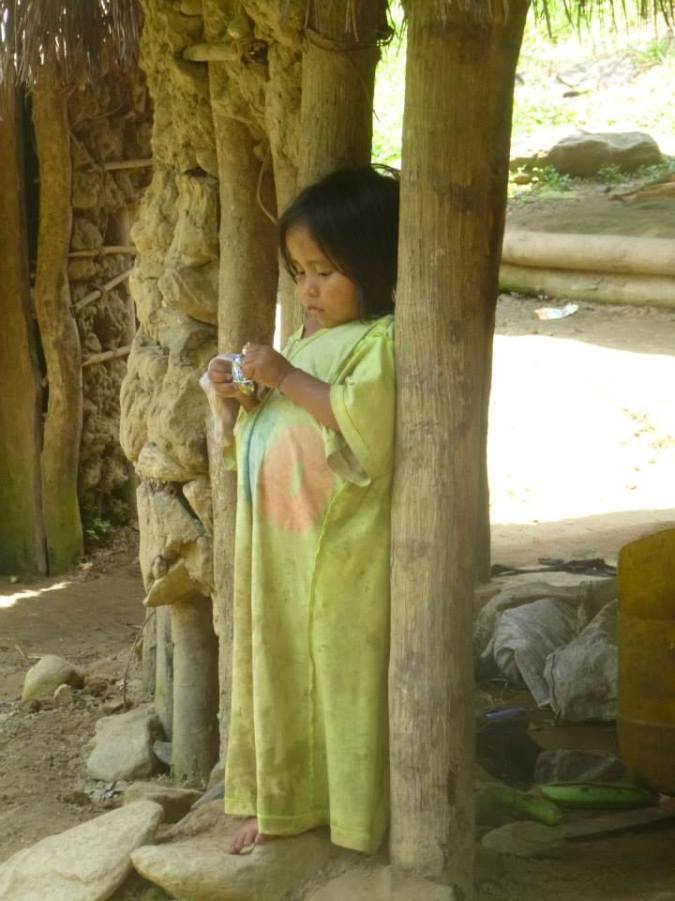 Our group in La Ciudad Perdida