Hampden’s Avenue has multiple personalities. Some reflect its past, others its present and future, and many present an attitude of “That was then, this is now.” The second chances abound.

If you’re awake soon after the methadone clinic lets out round one, you’re likely to walk through a tunnel of cigarette smoke and strange both whispered and yelled negotiations by those working to shed what ails them. Wool hats and jackets are year-round attire. The choice venue through the early morning light is outside of Royal Farms’ headquarters. Classical music tumbles out of the speakers, onto the ears of the daily sidewalk ornaments and seems to faze no one. 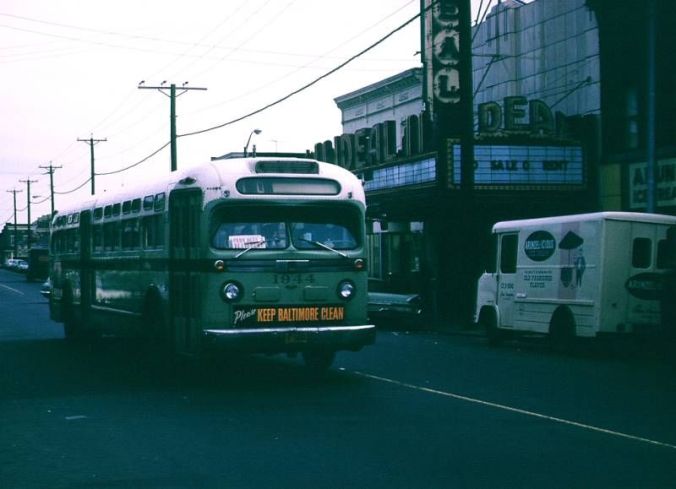 By the time the sun fully crests the hill on Chestnut Avenue, a new crew floods the pavement. They’re young and they’re hungry and they’re not here for the methadone. No, but vices and attempts at betterment still call out to them. They traipse in and out of shops and, in their swirl they snag drinks stirred with almond milk and paper bags with handles. The dawn crew still malingers but they’re watered down by wool sweaters and shoes that make clopping sounds and a palette of washed denim. They use the valets and shopping baskets in boutique stores and they stop to sniff things, soy candles and book spines and incense cones.

A few flicks of a cigarette butt away is The Ideal Arts Space, for now a dance hall that hosts classes such as swing dance and salsa and a church on Sundays. And like many things in Hampden in the past couple of decades, The Ideal is soon to be a phoenix rising.

At the turn of the 20th century, life in Hampden centered on cotton mills. Cotton was trucked up from the south and then processed into fabric or cloth at Mt. Washington Mill, Meadow Mill, Mill No. 1, and so forth. Before the Great depression, Hampden was economically booming. And the motto we now see stretched across stock photos of ethnically diverse people advertising giant apartment buildings, was true back then: “Live, Work, Play.” 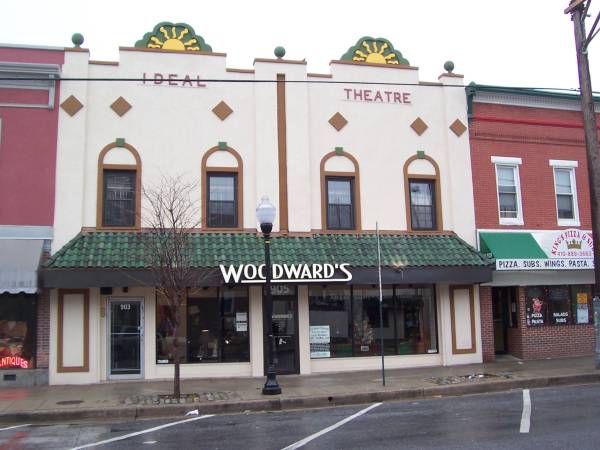 In 1916 The Ideal was one of 129 theaters on Baltimore’s main streets. Its next door neighbor for decades was another theater called The Hampden.

The Ideal Theatre and The Hampden were the two premier movie houses in the neighborhood. They catered to the success of Hampden through the first half of the century. But, when multiplex movie theaters began wooing crowds with options, The Ideal and The Hampden went the way of the once active mills.

If the revitalization of the mills is any indication, one might not be surprised to find that The Ideal will soon have a new use, a new crowd, while keeping its old school charm. Hampden’s mills now house restaurants, shops, galleries, athletics, nonprofits, offices, and apartments, all of which nod to the past with exposed concrete, massive factory-like windows, and the occasional old rusted appliance on a ledge somewhere.

The Ideal, which closed in the ’60s, cycled through as a Salvation Army, other retail ventures, an antique shop, and the dance hall we know today.

Plans to add to the story of The Ideal are now in the works as self-described serial-entrepreneur, David Rosenberg, is teaming up with the Five and Dime Ale House to create a multi-use entertainment venue. For the current residents of 21211, the new idea concocts mostly visions of giant SUVs circling and then plopping themselves in front of old marble stoops, stoops the drivers do not ascend everyday. But if you’ve met Rosenberg, for even a handful of minutes, you’d know he has already thought of that.

Rosenberg, a native Baltimorean and attendee of the University of Maryland, has certainly dabbled. He started in the clothing business, jumped to chocolate and candy stores, did a stint with Mr. Coffee, and most recently has worked for New York Life. He consults, he strategizes, he conceptualizes. Rosenberg’s favorite word is “immersive.” He sought to create an immersive shopping experience at his clothing stores, then an immersive visit to his candy stores, and finally the same full-service comfort at New York Life. Now, he has his sights set on one of his hometown’s main streets, The Avenue in Hampden with a vision for The Ideal that eschews the lingering retail slab wall that lines the interior to this day. A vision that harkens back to a marquee that once read, “Talking pictures at their very best.” A vision that puts “Play,” back into “Live. Work.”

Rosenberg presents his concept with the confidence that this will work, and he makes you believe so too. “This marries two things, my passion for music and my passion for creating an immersive experience.” It’s a combination of two things he loves. Rosenberg has played with a few bands himself, and currently plays once a month at the Cat’s Eye Pub in Fells Point. Rosenberg describes his vision as a performing arts venue with mostly music, some comedy, and he welcomes Baltimore institutions such as Stoop Storytelling.

The team working on The Ideal, which Rosenberg hopes to open by July 1, includes acousticians, architects skilled at bringing out historic features, and consultants who will ensure that the sounds of the street stay outside and the music remains in. Though passersby won’t be able to hear the shows, they will be able to peer through several panes of glass and see the show and in Rosenberg’s mind, want in.

Why this? Why now? “There’s no place for live music. The only good listening room is Creative Alliance. This will have more capacity, food and beverage, and a lot of bands.” Rosenberg already has food and beverage figured out through the next door Five and Dime Alehouse. He has been toying with flex seating area on the stage level and permanent seating on the street level.  “There will be walk-ins because it’s Hampden. I think this is really gonna be a crown jewel for Baltimore,” says Rosenberg. “I love Baltimore,” he says. “Baltimore is one of the best kept secrets on the East Coast.”

Rosenberg rattles off Baltimore’s tiny size, the harbor, the diversity, the authenticity, the warmth. What’s it missing? Performing arts space. “All these bands and talent are jumping over Baltimore with no place to play.” Rosenberg wants to fill that void.

Rosenberg has worked out a deal with Johns Hopkins Keswick to use its garage at 37th and Chestnut Streets. A shuttle will pick guests up from the garage and cart them to the venue. All part of the immersive experience.

To sweeten the deal for the parking-anxious, residents of 21211 will be able to purchase discounted tickets to shows at Rosenberg’s Ideal.

And with Hampden’s xenophobic past, one in which outsiders were traditionally unwelcome, it could be a challenge for The Ideal, despite its century on The Avenue, to find a comfy home in its latest Renaissance. But another one of Hampden’s traditions is rebirth. So why not The Ideal, all over again, over 100 years after its start.

2 thoughts on “The New Ideal”