This is how my niece (dog) Piper deals with her frustrations. This toy is an alien mixed with an octopus–Alienpus. I believe Alienpus is in much worse shape now. But Piper feels great!

I love how honest plants are. When they need something, they tell you. Two of my houseplants right now are visual reminders that I’m a neglectful indoor gardener. They are at my mercy. It’s up to me to save them. And they quietly tell me that by lying down and shriveling. They deal with their thirst in a reliable, predictable way.

I’ve been thinking a lot lately about how we humans “deal” with things. There is such a wide spectrum of ways that people react to challenges in their lives. You can tell a lot about someone by the way she deals with stress, grief, anger, annoyance, and even victory. Some cry, some yell, others turn inward. Some people fall silent. Lately, I’ve noticed that I need to get my reactions, my “deal,” in check and part of that has got to be slowing down a bit so that I can actually process before reacting. At the same time, because of yoga, I am more in tune with my emotions than I have ever been in my life. Maybe this has always been an issue and I am only just realizing it now.

In first grade my teacher was Mrs. Vivirito. She was a tall, thin blonde woman with a pointed nose an angular face. She wore wire-rimmed glasses and called us “boys and girls” in a prison warden’s tone. She had a tight-lipped face she’d make after she delivered a direction. I had never seen anything so terrifying in all my five years on earth. If she ever smiled, I must’ve been absent that day. To me, she was Cruella Deville without the coat.

My crunchy granola kindergarten had referred to us as “friends” and now we were “boys and girls”? Problem number one. Problem number two was that the Catholics were a bit much for this tiny product of Nancy and Dick. I cried every day for weeks? months? when my dad dropped me off. One day, I brought in my best multicolored slap bracelet–I had to try to make friends somehow. By the time we got to math, I was slapping and smacking and strutting my fashion sense. And then I slapped my eye with my new friend-magnet.

When I told Mrs. Vivirito what had happened she said I shouldn’t have brought the bracelet to school.

I said I missed my mom and I took my handy picture of her out of my pencil case to stare at it through the waterworks. Mrs. Vivirito said that computer class was next and if I didn’t stop crying, I’d ruin the computer with my tears. (An indestructible 1993 Mac the size of a small refrigerator being destroyed by a 47-pound child’s tears–pah!)

The Viv and I eventually smoothed things out, I guess. Though honestly one of my only other memories of her is the time that she discovered a smell emitting from my desk. She looked in my desk, dumped out its contents and went through my pencil case. There, she found weeks of dried fruit my mom had packed for lunches that I didn’t eat. I guess I figured: out of sight, out of existence. Nope. Not the way to deal with dried apricots. The Viv sniffed me out with that pointed nose and I sobbed my shame out the best way I knew how. I’ve always been pretty reactive, especially in the tear ducts.

Somehow I made it through first grade, elementary, middle school, high school, and college without getting beat up for being a whiny baby. Nevertheless my “deal” plan was still always, straight to tears.

When I first started teaching in Baltimore County, I had four observations per year. The first one went pretty well, didn’t think much of it. Then, they gave the feedback. I hadn’t even thought to notice all the things they noticed about me. By observation number two, my stomach was a pretzel and my psyche was the Tilt-a-Whirl. Again, it went well, was uneventful. However, this time when I went in for the meeting after the observation, I crossed over the threshold of the door into the principal’s office, I looked her in the eyes, and immediately began to sob. Unfortunately for all parties involved, this happened in every post-observation for the next two years. Something about the intense pressure and then the release of that pressure just sent me into a tizzy. It was significantly more embarrassing than it had been in first grade and I no longer had that photo of my mom in my pencil case to comfort me.

When we were in Athens this summer it was 108 degrees. No joke. 108. The Acropolis was closed because they didn’t want anyone to die in there. Unfortunately, I’d been in charge of the room-booking. I found a youth hostel in an inconvenient area and they found a little room for us on the top floor with a joke of an air conditioner. Chas was able to laugh it off but I felt downright angry with myself. Now, looking back I kind of kicked rocks and pouted while we were in an ancient and incredible city, even if it was a giant sauna. While our room was no less than 93 degrees by the time we went to sleep, we enjoyed the heavily air conditioned Acropolis Museum, had a great dinner with our friends Larry and Lauren, and the wall mural in our room offered a good joke.

Hilarious, right? If that doesn’t get you ready for “bed,” I don’t know what does.

My deal has pretty much always been tears. Last week though I noticed myself in an angry streak. I had a rough football game in which I got hit in the head with a shoulder, was tripped on a break-away, had my shirt ripped, and was poked in the eye. On the head-shoulder collision, I cried out of the shock. On the “trip n’ rip” (just made that up) I looked to the ref for a call and maybe threw in some theatrics. A girl on the other team called me a cry baby and then said, “Jesus fucking Christ!” at me. Unfortunately, although I’ve come up with several comebacks since Saturday (“The jerkstore called, they’re running out of you!”), I said “Jesus fucking Christ YOU!” back to her. Super pathetic. I have a sailor mouth but I don’t even say that. I left that field feeling disgusted with that girl, with football, and especially with myself. That night it was really hard to let the incident go. Even typing this I feel the heebie geebies creeping back in. The silver lining is that my jersey is now a very sexy belly shirt.

Another manifestation of my angry streak has been aimed at the apartment people across the street. I do often refer to them as my nemeses, which is not really fair because all they did was rent an overpriced, unoriginal apartment. (Also, their dogs typically have several raincoats, maybe fodder for distaste.) What I can’t stand is that they park on our block when they have a massive garage they can use–a garage that we have to stare at and a garage we had to hear being built for two and a half years. My retaliation is two-fold. I park really close to their cars and if it’s a fancy car, I sometimes leave a note that says, “Don’t you have a garage you can park in?” Again, I know. Pathetic. That’s why I am confessing. Remember how I said the Catholics turn me into a groveling idiot?

These angry behaviors coupled together with my omnipresent road rage and my THREE recent speed camera tickets, I’ve realized it’s time to chill out. I have got to stop this method of “dealing” with things and just send out positive energy. Maybe this is a huge “duh” but it’s pretty amazing how what you put out, you get back. I’ve been putting out negativity and getting it back. That changes now.

What won’t change is the crying. That’s just me. But when I want to be angry, I need to remember that peace just feels better.So I ask you, what’s your deal? Is it reasonable? Harmful? It is little passive aggressive notes on cars? Or is it love and laughter? I want to change my “deal” into a Frozen song. I don’t want to bottle it up or curse at strangers in or out of my Corolla, I just want to let it go. If someone yells “Jesus fucking Christ” at me in a co-ed beer league football game, that’s her problem. Not mine. And it’s time I realize that and just answer with peace and a good old sense of humor. I will still cry, but maybe I can laugh at the same time. 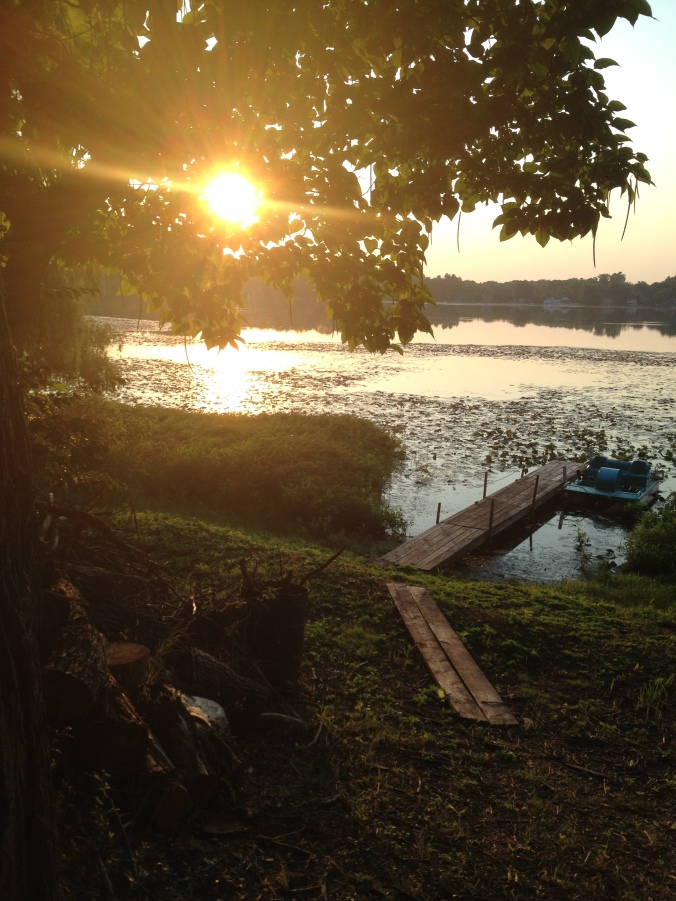 Peace wins. Photo of Winans Lake in Brighton, Michigan, near my grandparents’ house.