When Aubrey was little she had a large collection of stuffed animals and gave them all names. They each deserved her love, equally (except for Simba and one of the Ernies, they were slightly more special). She made a list of the animals because she found that she was unable to snuggle with all of them in her bed at the same time–not enough room and I’m sure she didn’t want to risk someone falling out of bed and then feeling even worse. The list was the order in which she’d snuggle with her animals so she could keep track and make it fair. Aubrey’s the most empathic person I know and she was already at it when she was a tiny little thing. When I’m staring at and cooing to my one month old niece who looks like a tiny doll version of Aubs, I half expect her to look at me with those Aubrey doe eyes and say, “And how are you?”

Empathy is obviously not limited to women. Nothing is. None of the traits and wonderful things I will discuss are. And I’m not trying to make some statement about gender roles imposed by society or not imposed by society. I just wanna tell you about the reasons I love the people I know who identify as women. And really because my women blow me away so often, this blog is limited to those I interacted with in just the last week.

Last Friday I cried in a room full of women (and just one man who has seen me cry countless times). To the room, my tears were probably a little confusing, maybe a little much or strange. But that afternoon, two of the women in that room came to take my yoga class and checked on me. Three texted me to check to see if I was okay and coach me through my bizarre episode. And I had one wine-assisted emotional conversation that evening with another. Women don’t shy away from feelings. They face them, embrace them, and then follow up later on.

Last Saturday I happened upon a post online announcing Houndmouth‘s tour and that very night they’d be in downtown Baltimore. Impulsively I went for it and bought three tickets. Within two hours I had Sierra and Emily to attend with me and they’d already Venmo-ed me for their tickets. The show was fantastic and all hovering just above five feet tall and tiny-footed, we were able to wiggle up right in front of the stage. Women say “yes,” pay you back right away, and then easily wiggle up to the second row.

On Sunday I got to see Emma’s great grandmother, Chris’s Nan, cradle her and was able to take a four generation photo. Longevity.

Monday was Chas’s and my two year anniversary. Almost all of my female relatives and several of my girlfriends wished us a Happy Anniversary. I have male friends and male relatives and while I find pretty much all “Happy _________” pretty meaningless and I appreciate people remembering, I do not judge people based on remembering wedding anniversaries. Still, women are thoughtful, have great memories, and want you to have a “Happy ______________.” 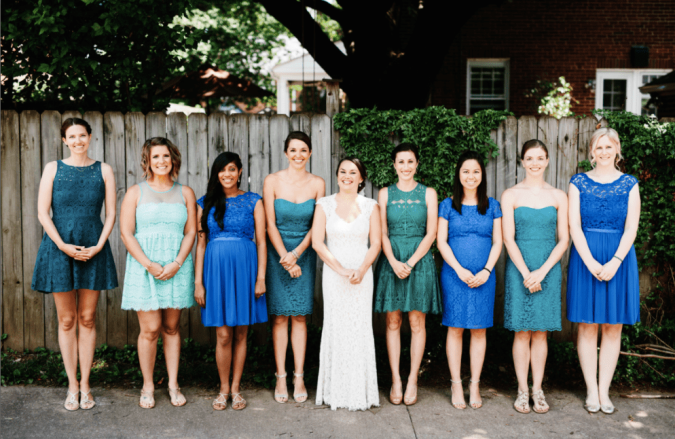 On Tuesday I met with the Education Committee of the Baltimore City Women’s Commission. Six of us maximized 90 minutes, totaling three pages of minutes that plan out our goals for the next two years. We deferred to one another, spoke openly, explained things when someone had a question, complimented one another, laughed, and created a list of 9 priorities that quite frankly, if carried out (when), Baltimore will actually change. The meeting was invigorating.

NPR once aired a fictional radio drama in which all of the world leaders were women (can’t find it online). In it, the leaders go around the table and say things like, “China, how’s everything going?” A female voice says something like “Peace and prosperity over here.” This repeats throughout the entire group. And the point is made. Women know how to get things done.

After my meeting, my mom, Pilar and Diana came over for beers and conversation. In two hours we covered the world, each of our lives from Baltimore to Colorado to South Dakota and back again. We covered love and procreation and school and I went to bed with the fullest heart. We build each other up. 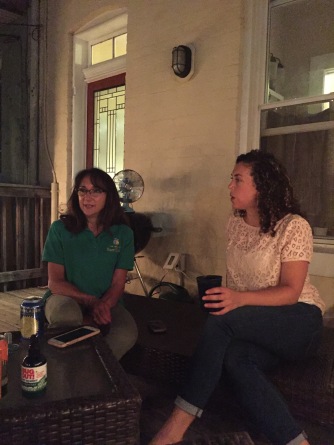 On Wednesday I taught two women-filled yoga classes and then hosted the 38th Street Book Club. Six of my neighbors came over. We tackled I’ll Be Gone in the Dark and the murderer and his ripple effects. We talked about the problems in our city and our world. We gracefully discussed and emoted and didn’t shy away from tough conversations. Women have real talk.

Thursday morning began with a “Women on the Run” run. Becky and I started our day off on the pavement and beginning my day with exercise and conversation sets me up for three things: feeling energized, an awake brain, and a promise of a nap later on. We support one another.

After work, a pretty boring first stint at campaigning for a state senate candidate, and my pre-destined nap, I headed to the meeting of my other book club: The Book Blub. Now it’s not typical to have two book club meetings in a row but that’s how things shook out. Book Blub is comprised of essential women in my life. We typically spend about 12 minutes on the book that some of us have read some portion of, 1:37 on life, and 11 minutes selecting the next book. There’s wine and there are snacks and bodily issues and love conundrums and immigration issues and the most laughter. And this time, there was Emma.

Another highlight of this meeting was following Erin Drew’s journey to find true love via video. Erin tried out for The Bachelor last night. To learn more and hear her marvel at the 22 year olds who “have so much hope,” follow her on Instagram @eedrew. One of the best parts about being a woman is that we laugh with one another.

This is a very incomplete list, because it’s really just seven days of being a woman among women and it doesn’t include all of the incredible women in my life. But in just seven days, I can see my good fortune in being born female and being surrounded by a set of strong, intelligent, caring, and hilarious other females.

6 thoughts on “Why I Love Women”